There are so few moments in one’s own life that make the spirit really soar. Where the heart is pounding and the knot in your throat is not from fright but from the shear adrenalin of trying to remember every second you are in that moment. For a photographer, whose career may depend on capturing these moments means that not only must they live through the event but they must also document it as well. So it comes to no surprise how impressed I am with photographers and journalists who put themselves in the line of fire to capture the moment, whether that be in time of disaster, war or events of historical consequences. And while this post does not qualify for any of the three above, it did force me to put into play all the notes and factoids of my photographic experiences to capture the moments. 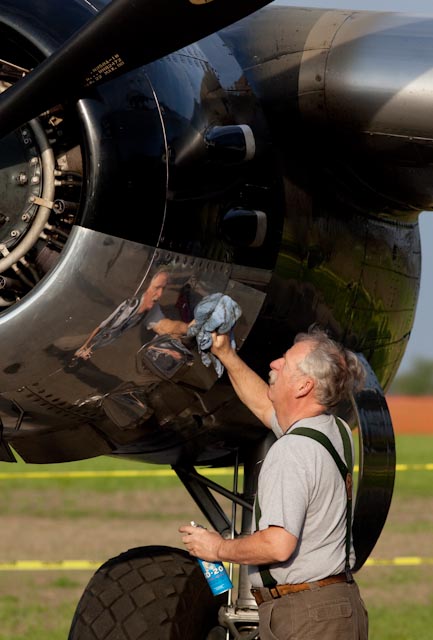 For the last week, I have been documenting the run-up of the 68th reunion of the Doolittle Raid on Tokyo.  The raid itself was a daring escapade.  Just four months after the Japanese attack on Pearl Harbor, sixteen B-25 medium range bombers successfully launched off the Aircraft Carrier Hornet on a huge propaganda  mission (and suicidal) that help turn US morale around regarding the war in the Pacific. The fact that there is still a reunion for this event, speaks volumes of the effect it holds on people, some three generations later. But enough of the history lesson!!

As part of this reunion, the Air Force, along with sponsors Lockheed Martin, Allied Sales, Pratt & Whitney and others invited many of the organizations and individuals, who own, maintain and restored the same aircraft type that flew the Tokyo raid, to fly their vintage B-25 airplanes to Dayton Ohio for the event. Of the twenty-five invited, twenty accepted. In the end, seventeen actually made the event. It was one the largest gather of B-25s since the war some sixty-five years ago. Brown Publishing, who prints many of the community papers in Southwest Ohio, allowed me to shoot the event on their behalf.

For a photographer/digerati like myself, there is nothing finer than being around machines, large or small, that have proven themselves worthy of their intent. And to be challenged to photograph them in the moment make the images that much sweeter. One memory that will always stay with me was the mechanic’s response to my question why the oil pans under the engines, even on the tarmac? “Son”, he said, “we carry sixty gallons of oil onboard for the engines. If they are not leaking, they are not running. Just the nature of the machine.”

The photos posted here were shot at the US Air Force Museum in Dayton Ohio or at Grimes Field (or above) in Urbana Ohio. 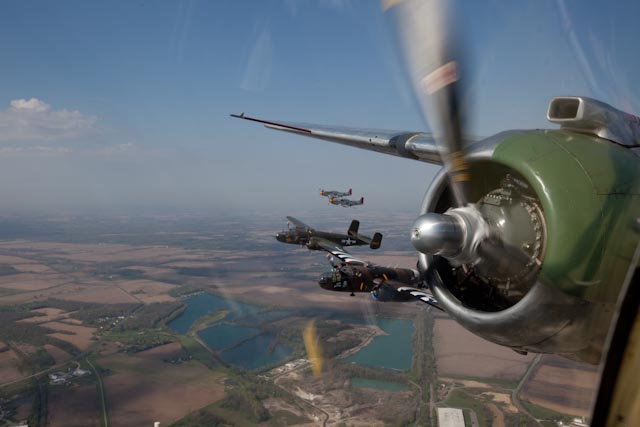